The Mystical City of God

NOTICE: I am currently in the process of uploading the entire City of God to this website. Thank you for your patience! Meanwhile, sign up below to get notified by email when I have new chapters available (you'll receive one chapter to your email per day). For yet another option, scroll down to legally download all four volumes to your computer.

Part One – The Conception

Treats of the Divine Fore-Ordainment of Christ and His Mother; the Highest Ideals of all Creation; of the Creation of the Angel and Men as their Servants; of the Lineage of the Just Men, Finally Resulting In the Immaculate Conception and Birth of the Queen of Heaven; and of Her Life up to Her Presentation in the Temple.

Chapter I. Concerning Two Special Visions Vouchsafed to My Soul by the Lord and Concerning Other Enlightenments and Mysteries, which Compelled Me to Withdraw from Earthly Things and Raised My Spirit to Dwell Above the Earth

Chapter II. How the Lord, in the State in Which He Had Placed Me, Manifested to Me the Mysteries of the Life of the Queen of Heaven

Chapter III. Of the Knowledge of the Divinity, Which was Conferred Upon Me, and of the Decree of the Creation of the World

Chapter IV. How the Divine Decrees are Classified According to Instants, and What God in Each Determined to Communicate Ad Extra

Chapter V. Instructions Concerning Holy Scriptures, and in Particular Concerning Chapter Eight of the Proverbs, in Confirmation of the Preceding Pages

Chapter VI. Concerning a Doubt, Which I Proposed Regarding the Doctrine Contained in These Chapters, and the Answer to It

Chapter VII. How the Most High Gave a Beginning to His Works and Created All Material Things for the Use of Man, While Angels and Men Were Created to Be His People Under the Leadership of the Incarnate Word

Chapter VIII. Which Follows Up the Previous Discourse by the Explanation of the Twelfth Chapter of the Apocalypse

Chapter IX. The Rest of the Twelfth Chapter of the Apocalypse is Explained

Chapter X. The Explanation of the Twelfth Chapter of the Apocalypse is Concluded

Chapter XI. In the Creation of All Things the Lord Had Before His Mind Christ Our Lord and His Most Holy Mother. He Chose His People and Heaped His Benefits On Them.

Chapter XII. How, After the Human Race Had Been Propagated, the Clamors of the Just for the Coming of the Redeemer Increased, and Likewise Sin; In this Night of the Ancient Law, God Sent Two Morningstars as Harbingers of the Law of Grace

Chapter XIII. How the Conception of the Most Holy Mary was Announced by the Archangel Gabriel, and How God Prepared Holy Anne for it by a Special Favor

Chapter XIV. How the Almighty Made Known to the Holy Angels the Opportune Decree for the Conception of the Most Holy Mary; And Which of Them He Selected for Her Custody

Chapter XV. Of the Immaculate Conception of the Mother of God Through Divine Power

Chapter XVI. Of the Habits of Virtue, With Which God Gifted the Soul of the Most Holy Mary, and of Her First Exercises of These Virtues in the Womb of Her Mother Anne; She Herself Gives Me Instructions for Imitating Her

Chapter XVII. Still Treating of the Mystery of the Conception of Holy Mary and Explaining the Twenty-First Chapter of the Apocalypse

Chapter XIX. Contains the Last Portion of Apocalypse XXI in as Far as it Describes the Conception of the Most Holy Mary

Chapter XX. Treating of What Happened During the Nine Months of the Pregnancy of St. Anne the Doings of the Most Holy Mary in the Womb of Her Mother, and Those of Saint Anne During that Time

Chapter XXI. Of the Felicitous Birth of the Most Holy Mary Our Mistress of the Favors, Which She Then Received from the Hand of the Most High, and How a Name Was Given Her in Heaven and on Earth

Chapter XXII. How Saint Anne Complied with the Law of Moses in Regard to Childbirth; and How Most Holy Mary Acted in Her Infancy

Chapter XXIII. Of the Emblems of the Holy Guardian Angels in Their Intercourse with the Blessed Mary, and of Their Perfections

Chapter XXIV. Of the Holy Exercises and Occupations of the Queen in the First Year and a Half of Her Infancy

Chapter XXV. How the Most Holy Child Mary Began to Speak at the Age of One Year and a Half; and How She Was Occupied Until the Time of Her Departure to the Temple

Treats of the Presentation of the Princess of Heaven In the Temple, the Favors She Received at the Hand of God, the Sublime Perfection with which She Observed the Rules of the Temple, the Heavenly Excellence of Her Heroic Virtue and Visions, Her Most Holy Espousal and other Events up to the Incarnation of the Son of God.

Chapter I. Of the Presentation of the most Holy Mary in the Temple at the Age of Three Years

Chapter II. Concerning a Singular Favor, Which the Almighty Conferred on Most Holy Mary as Soon as She Was Established in the Temple

Chapter III. Instruction Which the Queen of Heaven Gave Me Concerning the Vows of My Profession

Chapter IV. Of the Perfection in Which Most Holy Mary Passed Her Days in the Temple, and of the Exercises Which She was Ordered to Undertake

Chapter V. Of the Perfections of the Most Holy Mary in the Practice of Virtues in General, and of Her Advance in Them

Chapter VI. Of the Virtue of Faith, and How Most Holy Mary Practiced It

Chapter VII. Of the Virtue of Hope, and How the Virgin Our Lady Practiced It

Chapter VIII. Of the Virtue of Charity in the Most Holy Mary, Our Lady

Chapter IX. Of the Virtue of Prudence, as Practiced by the Most Holy Queen of Heaven

Chapter X. Of the Virtue of Justice, as Practiced by Most Holy Mary

Chapter XI. The Virtue of Fortitude, as Practiced by the Most Holy Mary

Chapter XII. The Virtue of Temperance as Practiced by the Most Holy Mary

Chapter XIII. Of the Seven Gifts of the Holy Ghost and How the Most Holy Mary Made Use of Them

Save "Ciudad" to Your Computer

I urge you to download all four parts of The Mystical City of God in PDF format right now, just in case... you never know when you may lose access to the internet!

Note: All books published before 1923 automatically enter the Public Domain, which means that the public owns this book and the 1914 copyright from the scanned edition below is no longer in effect.

Or if you prefer, you can purchase the Kindle Edition here (this edition is more readable than the scanned PDF version below), or buy the hardback set here (definitely the safest option if you can afford it, in case you ever lose access to your electronic devices!).

Would you like me to send you a daily vision for meditation from The Mystical City of God? 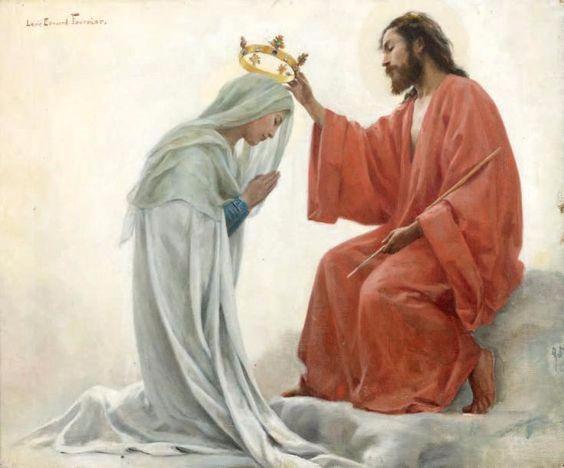 Enter your name and email below and I'll send you daily visions for meditation from The Mystical City of God.