The Time I Saw an Angel in My Living Room 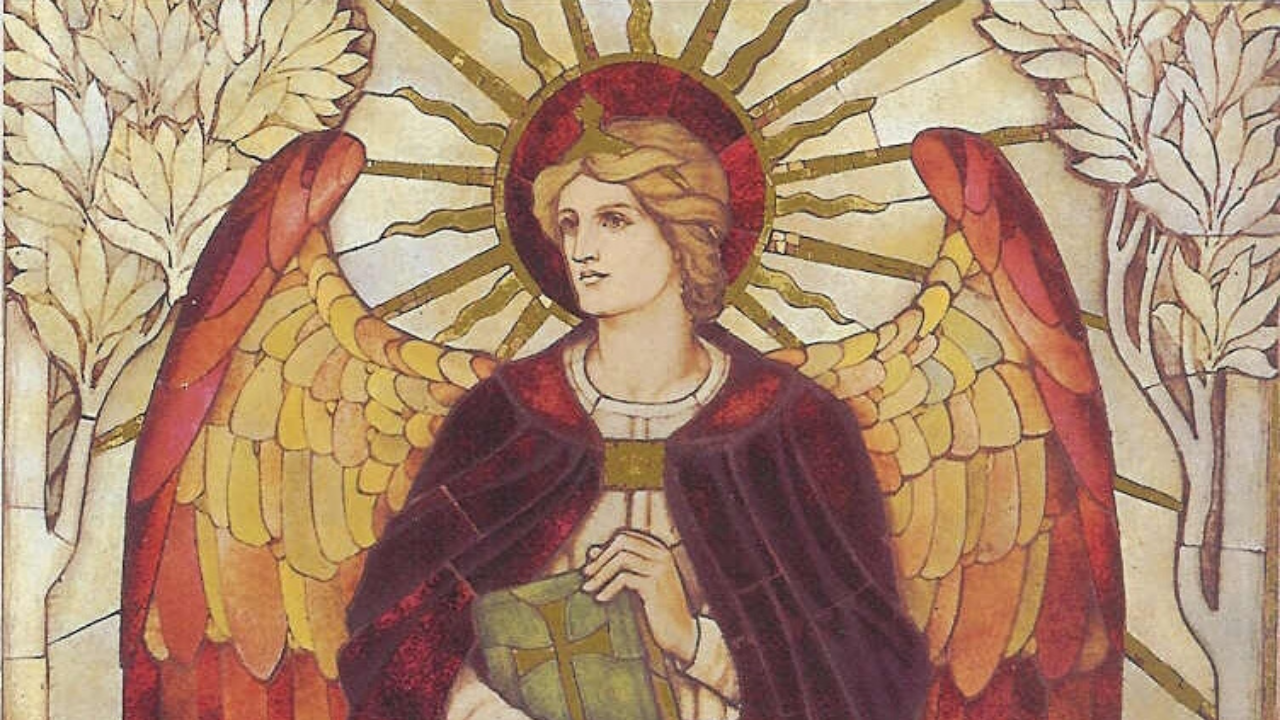 When I was a little girl, probably about 5 or 6 years old, I saw an unusual looking angel in my house. Around the same time, I also used to have terrible recurring nightmares.

The nightmare went like this: I was in a crowded room, filled with other children who were loudly playing. The sound of their voices was distant or muffled, as if underwater. There were balloons everywhere, slowly bobbing about.

I sat alone, and watched the balloons going up and down. A feeling of dread grew inside of me, as if something terrible were going to happen. It seemed as though all the balloons were about to burst, but no one was aware of this except for me. What's worse, I felt as if I were guilty of some terrible crime... what crime, I didn't know!... but I knew that my punishment was drawing nearer and nearer with every moment.

At last, the final moment came: someone was at the door. I glanced at the door, and standing in the doorway was the silhouette of a tall, dark man wearing a black suit and a black hat. I couldn't make out his face, but I knew that he was evil... and he had come for me. 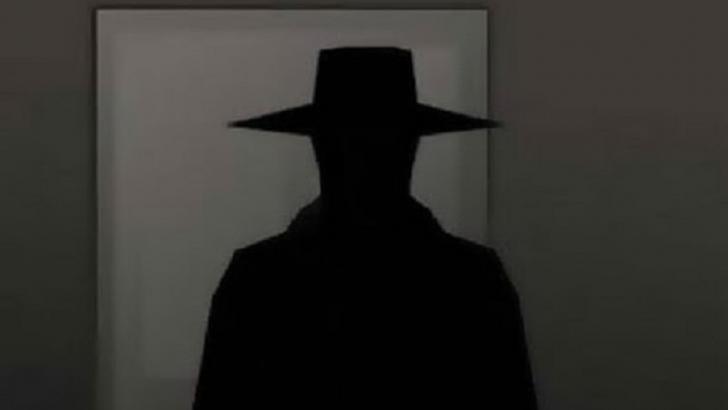 That's when I would wake up in a cold sweat, my heart pounding.

Although it never occurred to me at the time, I now wonder whether these nightmares could have been diabolical. I had a happy childhood and two loving parents, and I can't think of any traumatic event that would have brought these nightmares on. Also, the man in the black suit and hat seems far too outlandish to be representative of anyone I would have encountered while awake... rather, this figure seems eerily similar to some accounts of paranormal activity.

To me, this person seemed to be the devil (or a demon) threatening to drag me to Hell. Thinking back on it now, I don't think that this threat (whether real or imagined) could have been due to sins which I actually committed... I was just a young child, after all, and hadn't even reached the age of reason. It seems more likely that the sin I felt that I was being accused of in this dream would have been due to Original Sin: the sin of Adam, which we all have inherited.

Fortunately, my parents had me baptized as a baby, and since the Sacrament of Baptism removes all stain of original sin from the soul, the devil had no actual claim to me. So if those dreams were diabolical, they were nothing but smoke and mirrors, a trick to incite fear.

The Angel in My Living Room

When I was about the same age, I had another, entirely different dream. This dream I only had once, but I still have a vivid memory of it. Looking back now, I wonder whether the two dreams might have been connected in some way...

In this dream, I saw an angel standing guard in my living room. I wondered if he was my guardian angel. He didn't look at me, he just seemed to be posted there, watching, turned with his gaze fixed away from me, so I could only see the side of this face.

He was absolutely beautiful! But not exactly what I imagined an angel would look like. Guardian angels are often depicted as feminine looking with feathery white wings and shining white robes. But this angel looked like a strong man wearing red–bright red–and he had bright reddish orangish wings that were not like feathers but like flames. In fact, he seemed to be made out of fire.

I'm surprised I didn't think he was a demon, since I normally associate fire with Hell! But he was so beautiful, I think that must be why I knew he was a good angel.

This image of the Archangel Uriel, which I only just came across a few weeks ago, is strikingly similar to what I saw: 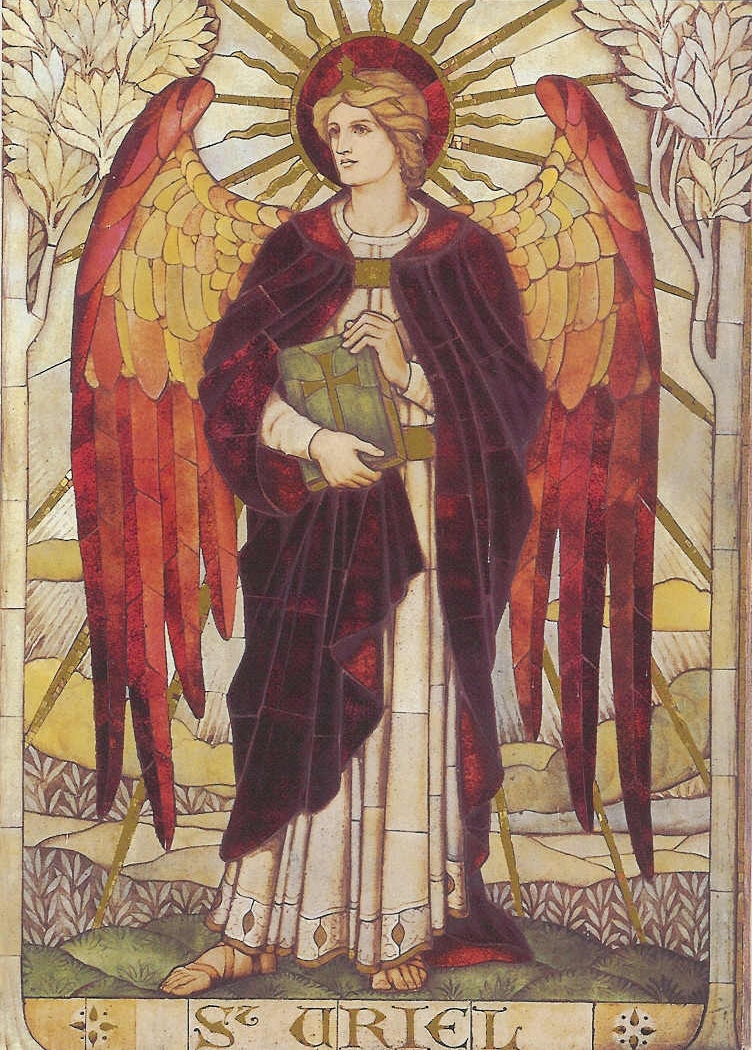 I don't know much about this angel, but doing a quick search on Wikipedia led me to a few interesting tidbits:

1. The name "Uriel" (Hebrew אוּרִיאֵל) means "God is my light". The motto of the University of Oxford takes the name Uriel translated into Latin: Dominus illuminatio mea ("The Lord, my light").

2. The name of Uriel, along with the names of many other angels, was struck from the list of those eligible for veneration in the Church of Rome by Pope Zachary in 745 in order to curb a tendency toward angel worship. In the Latin Church today, only the names of Michael, Gabriel and Raphael are licit for veneration. So that's why I had never heard of this angel before!

3. However, Uriel still made a mark on the Church of Rome. In the 16th century, Uriel appeared to a Sicilian friar named Antonio Lo Duca and told him to build a church in the Termini area of Rome. Lo Duca told Pope Pius IV about the appartition, and the pope asked Michelangelo to design the church. It is the church of Santa Maria deli Angeli e dei Martiri (the Basilica of St. Mary of the Angels and the Martyrs). 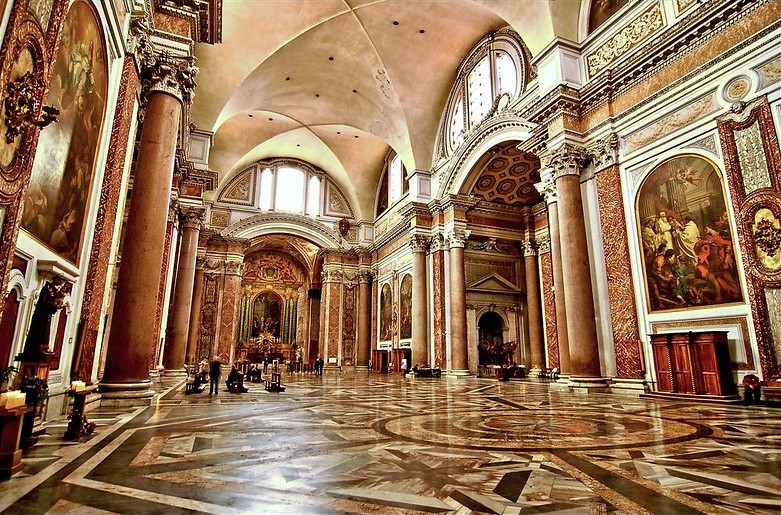 4. Although Uriel's name is not mentioned in the Latin Church, he is commemorated in the Byzantine Catholic and Eastern Orthodox churches on November 8th, the "Feast of the Synaxis of the Archangel Michael and the Other Bodiless Powers." He is regarded as the patron saint of the arts and sciences.

5. Uriel is sometimes named as one of the four chief archangels, together with Michael, Gabriel and Raphael, who preside over the four quarters of the globe. 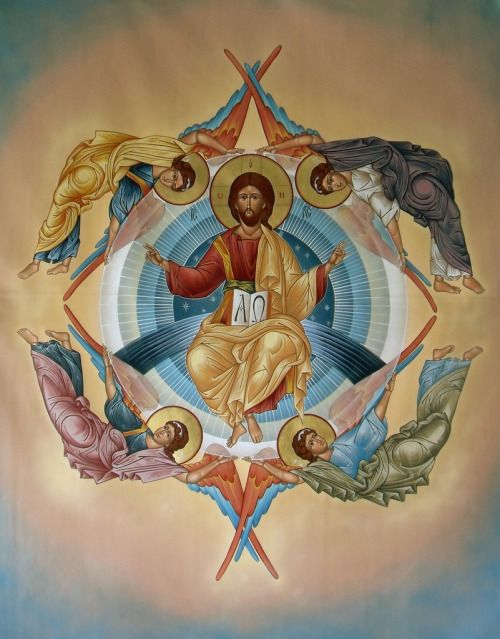 6. He is mentioned in the Old Testament aprocryphal books of Enoch and Ezra, where he is said to have been sent by God to warn Noah about the approaching flood.

7. According to Jewish tradition, Uriel checked the doors of Egypt for lamb's blood during the plague. (As the book of Exodus recounts, the Israelites painted lamb's blood on their doorposts as a sign, so that the "angel of death" would pass over those homes and the firstborn sons of those families would not be killed.) Uriel also is said to have led Abraham to the west, and he is supposed to hold the key to the Pit (Hell) during the End Times.

8. In a 15th century Homily on the Archangel Uriel from the Ethiopian Orthodox Täwaḥǝdo Church, a miracle is mentioned (taken from the Dǝrsanä ʿUraʾel). At the time of the Crucifixion of Jesus, Uriel is said to have dipped his wing in the blood and water flowing from Christ's side, filling a cup with it and carrying it to Ethiopia, sprinkling it on many places. Every place that a drop of blood fell, a church was later built.

9. In Anglican tradition, Uriel is recognized as the patron saint of the Sacrament of Confirmation. This is their intercessional prayer to Uriel:

Oh holy Saint Uriel, intercede for us that our hearts may burn with the fire of the Sacred Heart of Jesus. Assist us in co-operating with the graces of our confirmation that the gifts of the Holy Spirit may bear much fruit in our souls. Obtain for us the grace to use the sword of truth to pare away all that is not in conformity to the most adorable Will of God in our lives, that we may fully participate in the army of the Church. Amen.

10. The angel Uriel is depicted in Leonardo da Vinci's "Virgin of the Rocks", where he sits beside the Blessed Mother, the Child Jesus and the infant John the Baptist. The event in the painting relates to a medieval tradition about the Holy Family's journey into Egypt. According to the legend, John the Baptist was escorted to Egypt by the Archangel Uriel and met the Holy Family on the road. 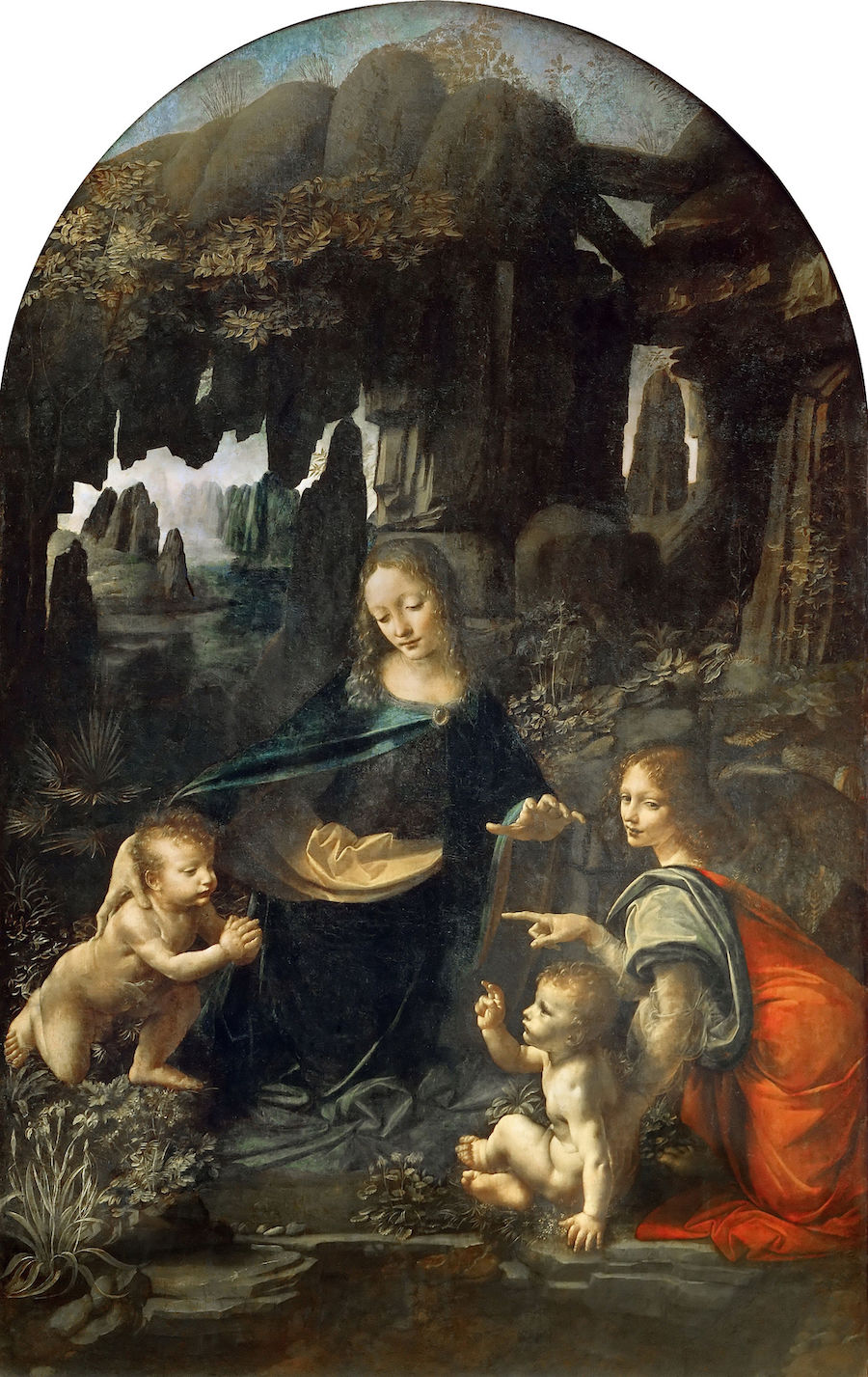 So, Who Was that Fiery Angel?

Back to my dream, what I remember about the wings is difficult to describe because it cannot be captured in any painting or sculpture. I could not make out individual feathers like on a bird. Instead, these wings were translucent, and flickered about like flames, especially the tips of the wings.

I don't know where this image came from, or whether it is authentic. Supposedly, it came from Medjugorje, but I can't find the original source. Still, this angel-like figure (seen to the right of the Holy Eucharist being elevated by the priest) has a translucent appearance similar to the wings I saw (only instead of the blue color, imagine colors of bright red and orange, and flickering like tongues of fire): 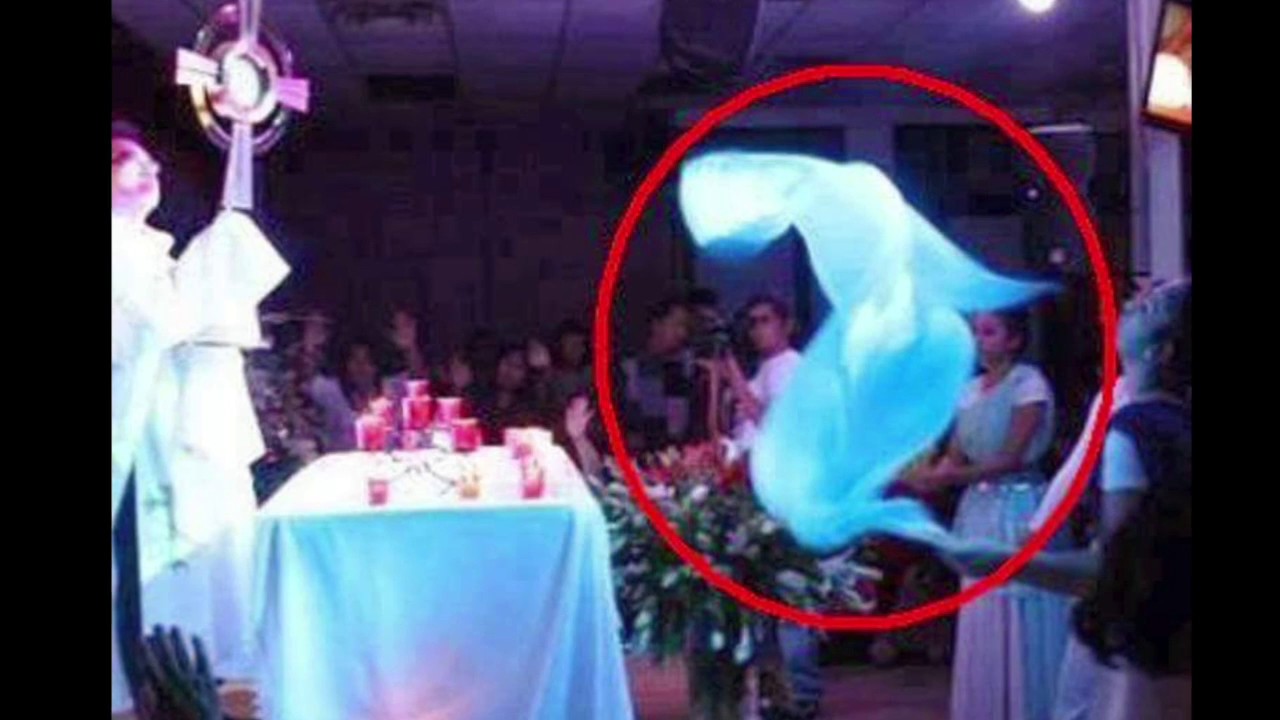 The angel I saw was not completely transparent all over like this. He appeared to me to be standing with his feet on the ground like a normal human person. However, the wings were something like this.

I remember hearing exorcist priest Father Chad Ripperger saying in one of his conferences on YouTube that the personalities of angels are much stronger than our human personalities, and consequently they are much more distinct. By analogy, one angel is as different from another angel as one species is from another species. Also, the bible talks about angels appearing as normal human beings. Since they don't actually have bodies, I suppose they may show themselves in a variety of ways depending on the situation.

So who was that angel in my dream? I always assumed he was my guardian angel. But could it have been Uriel I saw? Or was it all just a figment of my imagination?

I don't know. All I know is, I had never seen anything like this before, which makes me think that it probably wasn't purely imagined. Whoever he was, I really hope that someday I'll see him again and he will tell me his name.

Have you ever seen an angel or experienced their presence? I'd love to hear about it in the comments below! 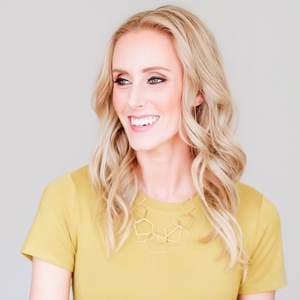 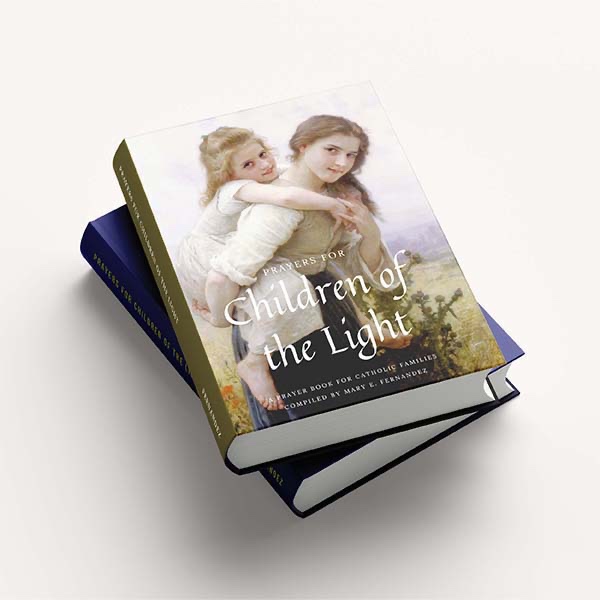 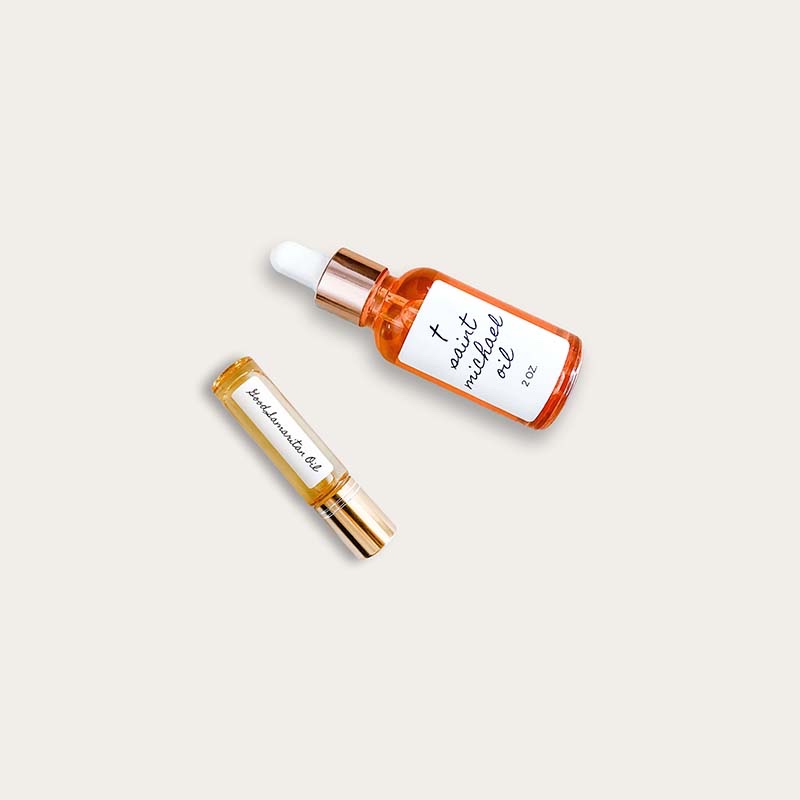 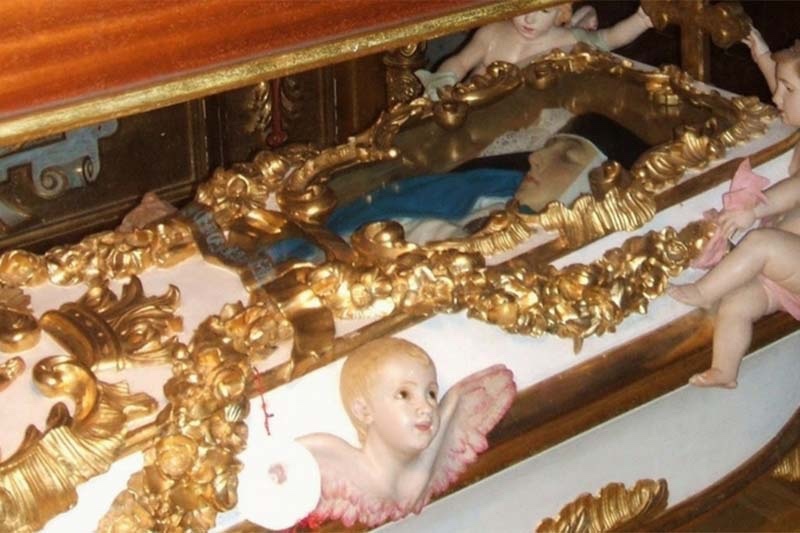